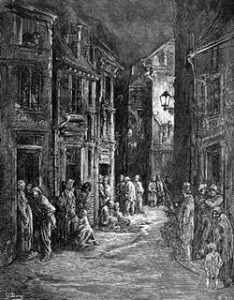 I am a normal child, who works in a farm with my family. I don’t know why, but many of my neighbors are moving to London. “We might have to move to London, too,” my father said. “Why?” I asked, even though I knew, because I didn’t want to move. It was getting harder for my family to live as the land for farming became smaller as the landowner reorganize the land. I could guess that the other neighbors are moving because it was hard for them to live and survive, too. I didn’t want to go to London because I’ve lived in Bath for very long time, but I started thinking again about moving to London, because our family could have serious, big problem of surviving, if the land is too small like this. My mother didn’t say anything, but was nodding to my father. We packed, and went to London next week by ship, just like others.

London was so different than where I’ve lived before–people looked busy, many grey factories that looked unhappy and boring. The weather was grey,too. It was dark, cold, and was raining heavily. Our family had to stop somewhere and take a rest from the long journey. We decided to stop beside the grey factory, where my father, mother, and I could see the workers working inside the factory through the small window. We didn’t say much, but were surprised by the workers who were working without stopping, just like the clock at the house, which doesn’t stop, and is exact. “Are we going to work like that?” I asked my parents. They didn’t answer my question, but I could know by the silence. We were getting worried, that we were next.